Reprise: Intersecting the Study of Social and Complex Networks 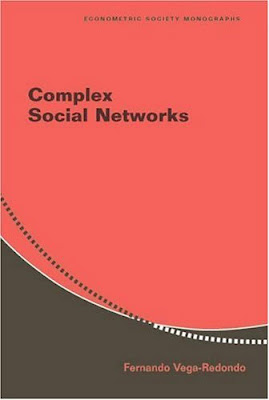 Several blogs ago I posted on the need for researchers to do more work intersecting the new science of networks (complexity science) with the sociological literature on social networks, in particular the global network literature. Some sociologists do not see much to be gained from such a merger. For those resistant to the idea or unclear as to what such a merger is about, you need to read Vega-Redondo's Complex Social Networks.

The purpose of this book is to outline, in detail, the avenues of study that emerge from the intersection of the new science of networks and social network analysis.

Rather than going on, I recommend you go to Josep Pujol's excellent review of the book, published at JASSS (Journal of Artificial Societies and Social Simulation)

One note is, however, necessary. Given that my blog caters to social science students and researchers new to complexity science, it is worth mentioning that Vega-Redondo's book primarily makes its case through mathematics. Do not let that scare you away. It is something social scientists have to get used to: complexity science makes extensive use of mathematics to make its arguments. Social scientists are often poorly trained to deal with equation-based modeling. They receive little training outside the study of statistics. We need to get past this hurdle to adopt a much broader and stronger toolset. Having said that, here is one such opportunity to learn something new. Your hard work moving through such a book is worth the effort!
Posted by Brian Castellani at 12:52