For those who follow this blog, you know that it is devoted to the development of complexity science and art at about a 50/50 split.  While blogs are great mediums for immediate expression, comprehension can get lost, as the argument being made, over time, gets lost in the archive.  I thought, therefore, it might be worthwhile to pause and summarize what I have been doing in my own complexity art, highlighting my current project.  Anyway, here is a brief review.

CLICK here for updated versions of my artistic and scientific vitae.

CLICK THIS PICTURE OR ANY PICTURE BELOW FOR A LARGER VIEW

For the past five years I have been working rather extensively on a set of assemblages, the purpose of which is to visually portray (in various combinations of photo, paint and video) my key thoughts about human complexity.  The title of my project is Virtual Sistine Chapel Global Composition. 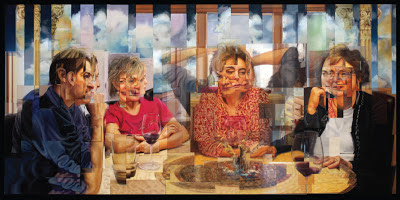 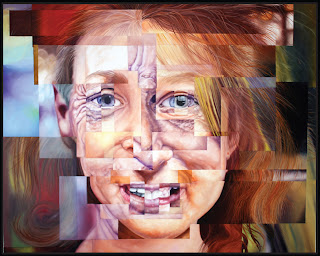 Most people who know my work would probably think that the complexity science came first, but it didn't.  Fact is, the opposite happened: the art came years before the science.  To explain, I go back to my work in graduate school, circa 1994 to 1997 and my first show (in 1994) at Kent State University (Kent, Ohio, USA), titled, appropriately enough, Postmodernism and Beyond.

Here are two assemblages from the time period.  While I was (and remain) strongly influenced by the analytic cubism of Picasso and Hockney, my agenda, even back then, was not to deconstruct time and space.  Instead, I was trying to build it up.  More specifically, I was layering and intersecting people, looking for their connections, relationships and networks of similarity, and then assembling all of these interdependent 'pieces-parts' into a complex system where the whole is more than the sum of its parts.

My first picture, for example, is a combination of my wife and niece.  The gestalt is someone beyond the individual images--note the similarities in facial structure.  The second is my wife and brother--note how each head, depending upon how the images are combined, results in one person standing out more than the other.

Furthermore, I realized that these assemblages (and those I have created for the past twenty years), while highly representational, are primarily symbolic.  They are iconic representations of a complex system--by icon I mean a visual (semiotic) sign that stands in place of or acts as a simulacra of something else.  In short, my art is a visualization of a type of complexity science.  In fact, my art works are built using the same SACS Toolkit assemblage algorithm used in my science.

Twenty years later, here is an assemblage I completed this year, showing how my work has evolved--well, I hope it looks like things evolved.  phew! 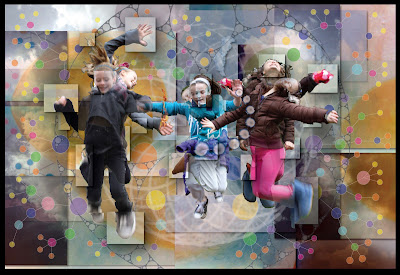 B. Systems Art, Assemblage, and other such Influences

In actuality, while indebted to analytic cubism, my work for the past twenty years is more influenced by assemblage and systems art, which I think are more in line with complexity science.

For example, while my art bears no resemblance to Rauschenberg, I am nonetheless influenced by his advancement of artistic assemblage, which goes back to, amongst others, Dubuffet and Duchamp and, even earlier, to Picasso and Braque.  For example, my work combines photography, paint, paper, video, etc--which mimics the multidisciplinary nature of complexity science.

Likewise, while my work bears no resemblance to Pollock or Stella, I am also influenced by systems art--which, all the way back in the 1960s and 1970s was exploring the implications of the two historical precursors to complexity science, namely systems science and cybernetics.

All of these approaches are unique in that they are bottom-up in their design, starting with a simple set of rules or procedures, which, when iterated, produce, at the macroscopic level, very complex paintings.  Even Chuck Close's work fits this tradition.

My assemblages follow a similar process: it involves, at the micro-level, taking photos and paintings and videos and repeatedly cutting them apart into smaller squares and then copying and pasting these sections together to create macroscopic systems. This bottom-up process, for example, has also manifested itself in a cartoon version of my work, as the two above images show.  Both follow a basic algorithm: draw a character, link the next character in reaction to it, repeat the process until the system emerges. 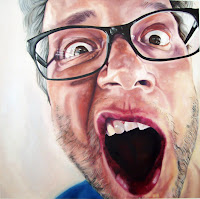 So, how do all of these ideas come together?  For the past twenty years my work has been a methodical attempt to develop a complexity art based on the ideas of cubism, systems art, assemblage and, as time has evolved, the explicit theories, concepts and methods of complexity science.  All of this work has come together, at last, for my first comprehensive project: Virtual Sistine Chapel Global Composition.  The self-portrait included here gives a clear impression of the effect that all this work has had on me.

As a prelude to finding somewhere to show this composition, I submitted a part of it to the Serpentine Gallery's Agency of Unrealized Projects--which I briefly review now.

D. The Agency of Unrealized Projects

The Agency of Unrealized Projects (AUP), run through the Serpentine Gallery in London, is the brain-child of Hans Ulrich Obrist and colleagues Julia Peyton-Jones, Julieta Aranda and Anton Vidokle.  Its purpose is to generate an ongoing catalog of projects by artists of any and all background who find, for one reason or another--intended or not--that the projects on which they worked is unrealizable--even if only for now.

In addition to Serpentine Gallery, the AUP is supported by e-flux and by daadgallerie, where it has, from September 9th to October 20th 2012, taken up temporary residence.  The goal of this round of the AUP is to present its evolving archive to the public.  Artists are invited to submit their own unrealized projects up to the 20th of October to AUP’s growing archive, which is what I did--CLICK HERE.

So, here is the project and the brief description of it that I submitted to the AUP:

In addition to its pure genius, Michelangelo’s Sistine Chapel is remarkable because it represents, in art history, the rare opportunity for an artist to present to the world a rather complete visual cosmology—something even Michelangelo, due to politics, economics, and ultimately the constraints of time and place found frustratingly difficult to achieve in other areas, such as the Tomb of Julius II.
Standing under Michelangelo’s colossal ceiling at the beginning of the 21st century, however, one has to seriously wonder, given the complex world in which we live, can such a project be realized today?  It is five hundred years later.  We live, now, in a highly complex, global network society with its supporting cyber-infrastructure; its swarm of clashing individual and collective identities; its inadequate grand narratives; its numerous global social problems; and its conflicting religions, ultures, myths, artistic traditions, political systems, economies and historical narratives—so much difference.  What cosmology could handle all of this complexity?  As the last hundred years of history, theory, and art have shown us, the obvious answer is none; it is an unrealizable project.

There is, however, a necessary and important and more modest alternative, held by a growing network of globalization scholars, artists, eco-feminists, cyber-theorists, continental philosophers and complexity scientists—and expressed well by the French theorist, Bruno Latour in his e-flux article (Issue 23), Some Experiments in Art and Politics (See also his article An Attempt at aCompositionist Manifesto, New Literary History, 2010, Issue 41).

For Latour, success in handling globalization comes from replacing cosmologies with compositions.  Unlike cosmologies, compositions are assemblages of negotiation, difference and heterogeneity; they are compromising, decomposing, compost piles; they are post-human, non-hierarchical, self-organizing, networked, evolving, adaptive complex systems; they are global and yet local, universal and yet relativistic; serious and yet ironically playful.  And, given their nature, they are ultimately useful: they can be taken apart, added to, or reassembled to meet different global needs.

Following Latour and others, my goal for the current project—which I have been working on for the past five years—is to take apart, add to, and reassemble the major themes of Michelangelo’s visual cosmology to create my own global composition.  This composition will include a variety of artistic and scientific assemblages—painting, photo, video, sculpture, networks, computational models, etc.

The thematic purpose of my composition is to create an inclusive, secular, scientific and more positive view of the human condition in today’s highly complex global network society.  My composition draws extensively on the latest advances in globalization studies, complexity science, global mythology, the natural and social sciences and, equally important, my local culture as an Italian-American living in Cleveland Ohio (USA), including in my assemblages family and friends as many of the heroic characters--including in my pictures the people in my life is an explicit turn to Jame Joyce's Ulysses and the idea of exploring the heroic through the lives of everyday people such as myself, family and friends.

As way of an introduction, Figure 1 (located above) provides a quick overview of my six themes and the ten images I have so far completed, as overlaid on a schematic of the Sistine Chapel.  (My ultimate architectural form, however, would be some type of network structure.)

Figure 2 provides a more detailed close-up of four of my completed images.  All images start as photo-assemblages created on the computer with Adobe Photoshop and Adobe Illustrator.  Some images, as shown in Figure 2, are then painted on canvas.

Finally, below is an even more detailed overview of one of the four pictures in Figure 2, called Cathy's Dinner Party.  It combines extensive photo-assemblage work done in Adobe Illustrator and Photoshop; the assemblage was then fully painted in oil on a five foot by three foot canvas; which was then photographed and integrated with the initial photo-montage.  The painting is symbolically charged, referencing a variety of symbols found in Da Vinci's Last Supper, including the famous chalice (V) formation.  The painting was also worn down and corroded with various materials to explore how so many of the images from the Renaissance have worn away, been restored to varying degrees and, in their ware, become iconic images.  What, however, does 'wear and tear' mean in a digital, globalized age?)  Anyway, there is a lot more that can be said, but that is enough to make the basic point. 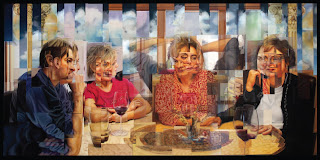 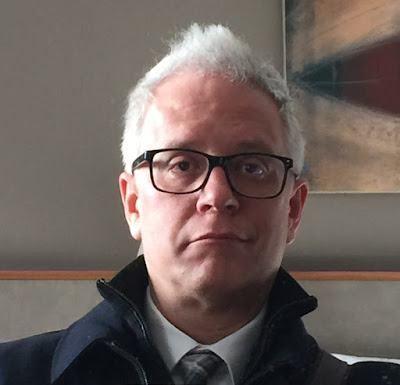 For those interested, here are my artistic and scientific vitae.