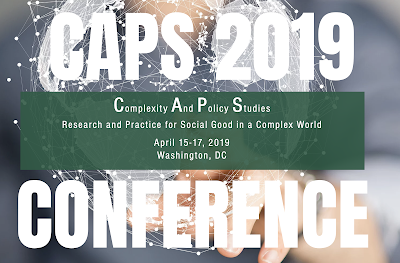 Thanks to CAPS for the opportunity to present on the utility of CECAN  (Centre for the Evaluation of Complexity Across the Nexus) and, more specifically, our software app, COMPLEX-IT for addressing the complexities of policy evaluation.

Here we have provided a few resources relative to our presentation:


Posted by Brian Castellani at 17:56 No comments:

The Complexities of Postindustrialism in the UK; Or, Whatever Happened to Industrial Teesside? 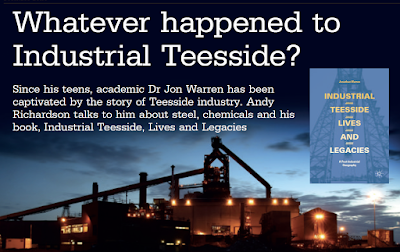 As an American now living in North East England (Durham County specifically), I am overwhelemed with the significant ways in which life here is remarkably similar to life in Northeastern Ohio (USA) where I lived for 20 years.  The main similarities are coal and industry, struggling cities trying to find their way, deindustrialisation and a loss of jobs and work, and yet a hard-working honesty and straighforwardness, combined with a resolve and pride in being from the area and making a commitment to seeing it through the tough times.

It is for these reasons and their global similarities that I wanted to highlight a very well-written and insightful book by my colleague, Jon Warren, titled appropriately enough, Industrial Teesside, Lives and Legacies.  What I very much like about the book is its Joycian way of seeking to preserve a historical knowledge of the area, mainly through the variety of first- and second-person narratives and archival photos found throughout the book.  It was a joy to read, particularly for someone new to the area, as it really helped me to understand the history of the community that my family and I now call home.

And it is for these reasons that I recommend the book to others -- and not just those living in North East England, but also anyone seeking to make sociological sense of how working-class communities throughout the global north are dealing with the significant ways in which globalisation and post-industrialisation have changed their lives, both for the worse and, also, with optimism and hope, for the better!

For more on Jon Warren's views, see this recent interview with him by Business Echo.

Posted by Brian Castellani at 17:21 No comments:

Nervous States: Democracy and the Decline of Reason (A Book Review) 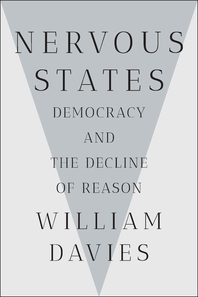 Recently I came across the work of the political economist, William Davies -- who is at Goldsmiths, University of London.  I have to say I am a major fan.

In particular, I really like his new book, NERVOUS STATES: Democracy and the Decline of Reason -- which you can read about for yourself on Davies's website (along with his other books and recent new media articles, which are very good.)

Here is a summary of the work, as presented on the W.W. Norton website: "In this age of intense political conflict, we sense objective fact is growing less important. Experts are attacked as partisan, statistics and scientific findings are decried as propaganda, and public debate devolves into personal assaults. How did we get here, and what can we do about it?"

"In this sweeping and provocative work, political economist William Davies draws on a four-hundred-year history of ideas to reframe our understanding of the contemporary world. He argues that global trends decades and even centuries in the making have reduced a world of logic and fact into one driven by emotions—particularly fear and anxiety. This has ushered in an age of “nervous states,” both in our individual bodies and our body politic."

"Eloquently tracing the history of accounting, statistics, science, and human anatomy from the Enlightenment to the present, Davies shows how we invented expertise in the seventeenth century to calm the violent disputes—over God and the nature of reality—that ravaged Europe. By separating truth from emotion, scientific, testable facts paved a way out of constant warfare and established a basis for consensus, which became the bedrock of modern politics, business, and democracy.
Informed by research on psychology and economics, Davies reveals how widespread feelings of fear, vulnerability, physical and psychological pain, and growing inequality reshaped our politics, upending these centuries-old ideals of how we understand the world and organize society. Yet Davies suggests that the rise of emotion may open new possibilities for confronting humanity’s greatest challenges. Ambitious and compelling, Nervous States is a perceptive and enduring account of our turbulent times." (FOR MORE, SEE ALSO HIS INTERVIEW WITH THE NEW YORKER)

MY OWN TWO PENCE WORTH

What I particularly like about Davies's work is that he has turned to the work of psychology and some of the latest research in cognitions and emotions to make sense of policy and politics today.

But not in a reductionist fashion that excludes the social or political.

Davies is not advocating, for example, some rediculous pop-variation of evolutionary psychology or behavioral economics -- which, for the most part, basically ignores social and political context, opting instead to go searching in our neurons (instead of acknowlding the obvious) for why poor people living in a post-industrial community, for example, with no viable plan for improving their health and wellbeing are so anxious -- and therefore fall prey to the arguments of nationalistic populism.

Instead, he takes these 'latest ideas' emerging out of cognitive sicence, evolutionary biology, cultural anthropology and integrates them with cutting-edge thinking in political sciences, sociology, philosophy and political history.  The result is a rather rigorous political psychology (or, alternatively, a psychology of public policy) in interaction its wider socio-political context -- which, for those new to these ideas, has a very strong tradition across fields and areas of study, going all the way back to the early work of Sigmund Freud and Theodor Adorno and the Frankfurt School, and even further back to such pivotal figures as Vilfredo Pareto, Friedrich Nietzsche, Hippolyte Adolphe Taine, and Graham Wallas.

To me, if we are going to make sense of what is happing throughout western societies today in the global north, particularly vis-à-vis political and policy decision making, then it is only through such a lens that we will find our best answers and, as well, our solutions.  In short, we need a new therapeutic politics that truly takes the fears and worries and anxieties of people seriously (irrational or not) and then, in response, respecfully offers policies and political options that heal and progress, rather than delude and divide.

As such, as you can guess, I strongly recommend reading NERVOUS STATES.

Posted by Brian Castellani at 14:19 No comments:

p=.05 Or, the utility of messy scientific models 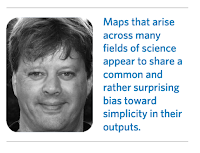 THE IMPORTANCE OF MESSY MODELS

I really like a recent commentary piece published by the complexity scientist, author and journalist, Mark Buchanan.

It is titled, appropriately enough A Natural Bias for Simplicity

As a fellow complexity scientist, Buchanan fully supports the argument that our scientific models need to do a better job embracing the complexity of the topics they seek to understand.

Nonetheless, given that models are -- in the vocabulary of complex and critical realism -- only traces of the things they seek to understand, they will always fall short of the evidence; that is, they will always be somehow wrong or incorrect or, at best, evolving approximations -- particularly as the topic becomes more complex.

Still, in the face of such a challenge, the reality is that we actually can and often do come to understand things, and usually rather well.  However, we do so -- psychologically (both emotionally and cognitively) speaking -- through models that are relatively messy and sloppy.

THE IMPORTANCE OF CONTEXT AND MULTIPLE PATHWAYS

Messiness does not, however, have to lead to a lack of refinement or precision.  In terms of the social and health sciences, for example, there are several very useful ways to handle this messiness.  I will quickly highlight just three:

Still, whatever the fix, the ultimate point here is that messiness is a condition of complex modelling; in fact, the messiness of a model is often why it works.  However, a model's messiness can be managed, particularly when we think about the context in which it is situated and the multiple pathways along which it evolves (or, alternatively, clusters or groups).  And, when we realise that singular, one-size-fits all models meeting does not often fit-the-bill, even if we can demonstrate that it has a p-value of .05.

Posted by Brian Castellani at 15:37 No comments: