A major issue in quantitative social science today is dealing more effectively with, as Emma Uprichard calls it, our data saturated plastic present---her words for describing the world of endless digital data and its supporting cyber-infrastructure in which we now live.

In response, my colleague, Rajeev Rajaram and I have been developing the SACS Toolkit and our case-based modeling approach to include the tools of dynamical systems theory and non-equilibrium statistical mechanics---the former focuses on mathematically modeling complex systems across time and the latter on modeling the links between microscopic behaviors and macroscopic patterns.

Click here to see our most recent paper, which was published in Complexity.

Having said that, we were wonderfully surprised and very much excited to have come across a group of likeminded social scientists who likewise find the tools of non-equilibrium statistical mechanics and dynamical systems theory useful for modeling social complexity and complex social systems.

The website is called Non-Equilibrium Social Science.  It appears to be an interesting group of physicists, complexity scientists and economists, who are all over the place--involved in the private, public and academic sectors--and espousing a rather diverse set of scientific, economic and political views--not all of which anyone, including myself, will agree with.  But, that is the purpose of a good blog, to get people thinking, agree or not!  Besides, Joseph Stiglitz, one of my heroes, is on their science board, so that is very cool!

For me, I am mostly interested in their development of the tools of physics for studying and modeling the temporal and spatial dynamics of complex systems, particularly in reference to big data. 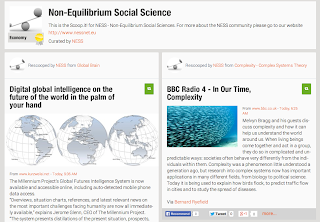 What I also very much like is how well-connected their website is to what is going on in the world of complex social science.  They have a twitter feed, archives, a blog, and so forth.  I particularly like, and have used in my classroom teaching, their SCOOP.IT account, which you have to check out!

Well done!  I look forward to learning more about this group. 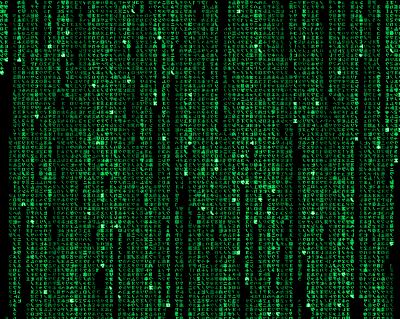 As my colleague, Emma Uprichard, has pointed out in a series of recent articles, we live, today, in a data-saturated-plastic-present--for more on Uprichard's articles, click here. 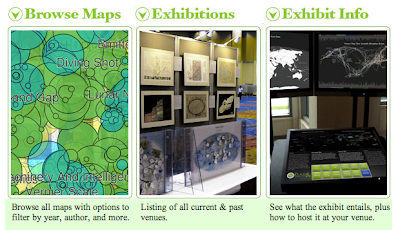 I am happy to announce that my complexity map was chosen to be one of the seven maps representing this year's iteration of the Mapping Science project.  The exhibit was envisioned by Katy Börner, Kevin Boyack, Sarah I. Fabrikant, Deborah MacPherson and André Skupin in January 2005.  Currently,  it is run by Katy Börner and Todd Theriault

Places & Spaces: Mapping Science is meant to inspire cross-disciplinary discussion on how to best track and communicate human activity and scientific progress on a global scale. It has two components: the physical part supports the close inspection of high quality reproductions of maps for display at conferences and education centers; the online counterpart provides links to a selected series of maps and their makers along with detailed explanations of how these maps work. The exhibit is a 10-year effort. Each year, 10 new maps are added resulting in 100 maps total in 2014.


Click here to see more about the Mapping Science project.