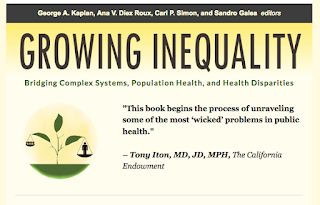 The edited book is the result of a handful of years that Kaplan and a working group of interdisciplinary colleagues spent struggling to figure out how to more effectively think about, model, and address growing health inequalities in the States, Canada and, by extension, the world.

The challenge, however, was how to proceed from there, which allowed the working group to happily descend into the chaos of real interdisciplinary work -- which is not easy by any stretch of the imagination.  Such work requires creating a shared vocabulary, embracing very different ways of thinking about research problems and their solution, and realizing that people often use the same scientific terms (such as non-linearity, for example) in rather different ways, and so forth.  Then there was the second issue of how to define, think about, model and manage this thing called 'complexity' or, more specifically, a 'complex system.'

On the first of these two issues the hard work by Kaplan and colleagues is to be, overall, commended.  In terms of the group's outcome, the book is organized into fourteen chapters -- with the acknowledgement and first and last chapters functioning as meta-reflections on the work the group did over its roughly five years of existence.  The second chapter constitutes a reflection of method, addressing the issue of complexity and multi-agent simulation.  The other twelve chapters focus on various public health issues, from improving health behaviors to the built environment to crime to health and socioeconomic well-being.

As concerns the second issue, however -- that is, how to define and understand and model complexity -- the book seems to fall short, overall, in several important ways:

1. To begin, the definition of complexity embraced remains narrow.  Mainly, while differences among the authors seemed to exist (as in Stange and colleague's chapter, which embraced a wider view) the group mainly employed what the French systems scholar, Edgar Morin calls restricted complexity -- which is basically conventional science, albeit now focused on complex systems.  As Morin states, "The problem with restricted complexity is that it still remains within the epistemology of classical science. When one searches for the 'laws of complexity,' one still attaches complexity as a kind of wagon behind the truth locomotive, that which produces laws. A hybrid was formed between the principles of traditional science and the advances towards its hereafter. Actually, one avoids the fundamental problem of complexity which is epistemological, cognitive, paradigmatic. To some extent, one recognizes complexity, but by decomplexifying it. In this way, the breach is opened, then one tries to clog it: the paradigm of classical science remains, only fissured."  (For more on this issue, see also Byrne and Callaghan's Complexity Theory and the Social Sciences or Jenks and Smith's Qualitative Complexity.)

2. The second problem follows from the first: given their restricted definition of complexity, the working group primarily employs a reductive multi-agent simulation approach -- which struggles to deal with social structural issues and the macroscopic systems that serve poor and lower income individuals.  Nonetheless, some of the models (as in the chapter on crime and health) are very well done and do offer some useful insights.  Still, the focus, overall, is reductive microscopic modeling.

3. Also, related, as shown on the map of the complexity sciences, there is no wider usage made of complex network analysis, real-data-driven geospatial modeling, dynamical systems theory modeling, and various other computational modeling techniques.  Also, there is no critical discussion about what methods are useful and when -- for example, the chapter on simulation and big data does not address the significant criticism leveled at the issue. In contrast, as Byrne and Callaghan make clear in Complexity Theory and the Social Sciences, not all computational and complexity science methods are equal in their utility for social scientific inquiry.

For more on this issue, see Burrows and Savage's excellent article, After the crisis: Big Data and the methodological challenges of empirical sociology; as well as the SAGE journal, BIG DATA & SOCIETY.  On a positive note, however, Kaplan and colleagues do provide a very good overview in their concluding chapter of the need to ground simulation in real data -- which is a major argument of such journals as Journal for Artificial Societies and Social Simulation.

4. Still, the final arguments Kaplan and colleagues make in their concluding chapter are not really new.  In fact, they have been argued extensively by others, none of which is really cited (See, for example, the Handbook of Systems and Complexity in Health) -- which leads to the final problem with the book: the insularity of its research and references.  Other than a few citations to the global field of the complexity sciences -- which has been rather highly involved in modeling health and healthcare in complex systems terms -- the references in the chapters were mostly limited to a small set of publications.  For example, in Chapter 2 on method, despite discussing the epistemological issues surrounding simulation, the only scholars cited are mostly those from the early days of systems modeling and cybernetics. The result is a somewhat biased and narrow view of the import of complexity for the fields of health and healthcare.


Still, despite these limitations, the main point of the book remains cutting-edge and clear: if we are to advance our ability to more effectively address the complex health inequalities that now exist on a global level -- and the myriad intersections they have with such global complexities as economy, politics, geography, ecology and culture -- it is imperative that public health scholars and the larger healthcare field (and those they serve) embrace a complex systems perspective.  Oh, and let us also not forget the importance of such an embrace of systems thinking by those civil servants, the world-over, who write the policies....