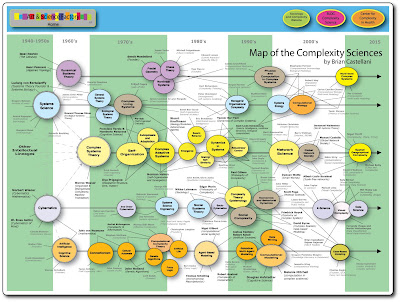 Hello everyone!  As you can see above,  I have (once again) updated my map of the complexity sciences.

To cite this map use the following

Complexity Map Version 5 is a massive update, based on my continuing attempt to keep the map as useful as possible to an ever-growing field and audience.  For Version 5, I went back to the beginning, as they say, trying to "fill in" the map and its major trajectories by:

This map is a macroscopic, trans-disciplinary introduction to the complexity sciences.  Moving from left to right, it is read in a roughly historical fashion, evolving along the field’s five major intellectual traditions: dynamical systems theory (purple), systems science (light blue), complex systems theory (yellow), cybernetics (grey) and artificial intelligence (orange).  Placed along these traditions are many of the key scholarly themes in the complexity sciences.  A theme’s color identifies the historical tradition with which it is best associated, even if a theme is placed on a different intellectual trajectory.  Themes in brown denote discipline-specific topics, which help illustrate how the complexity sciences are applied to different content. Double-lined themes denote the intersection of a tradition with an entirely new field of study, as in the case, for example, of visual complexity or agent-based modeling.  Connected to themes are the scholars who founded or exemplify work in that area.

I learned a few lessons about the challenges of mapping the history of science.

First, as Foucault says, there are only histories of the present.  History is largely a backward looking profession, charting the movements of things across time and place from the present position of the historian.  For example, I remember my father-in-law, Len Rusnak, saying that the further away we get from certain presidents in the states, for example, such as Truman, the better or worse they start looking, depending upon the lines of influence we are drawing from them to the present.  The same seems to be true of science.

I have noticed over the years that, as new area of study emerge within the complexity sciences, new historical lines of influence are established, new scholars emerge as more or less important, and new historical lineages are developed.  Case in point.  If you go back to the reviews of complexity written in the late 1990s, the emphasis was, historically speaking, almost entirely on systems science, cybernetics and the work taking place at the Santa Fe Institute, in New Mexico, USA.  More recently, however, lots of smaller and more specific histories have emerged.  In the social sciences, for example, ties are being made to all sorts of epistemological positions, from postmodernism to poststructuralism to constructionism to critical realism.  And, while a scholar like Per Bak and his work on self-organized criticality, for example, was a "massively major" field of study back in the 1990s, he and his work have receded into the background, as new areas and scholars have come into the picture, so to speak, and have taken over.  As a result, the old stories have receded or softened a bit, turning into a more complex and nuanced storyline.  In response, I have found myself having to constantly evolve, develop and adapt the complexity map.

Second, it seems that, given how wide-reaching the field is now, everyone has their own personal standpoint on the history of complexity.  I am constantly told, for example, that the complexity map, "while useful, is incomplete!" or that, "while it gets at most of the major stuff, it is a partial view of just one person!"  What?  Of course it is!  Have you not read anything on the philosophy or epistemology of complexity, going all the way to the early scholars developing the field of cybernetics and systems science?  The big, big point made by all these scholars is that all maps, models and theories of complexity and its interdisciplinary study will be, by definition, incomplete!  I mean, we are talking about an approach to science that, as Stephen Hawking and others have suggested, will most likely become, in the next fifty years, the dominant definition of science, with the word "complexity" simply being dropped.  So, C'mon folks!"

Given such realities, what is the goal of the current map?  While it strives to be reasonably exhaustive and impartial, it ultimately strives to help people into the field, to give them a broad understanding of many of its key fields of study and important scholars, pointing them in a variety of directions which they can explore further, drilling down, as they say, into finer and finer levels of analysis.  Or better yet, giving them the tools to develop their own maps, their own networks of connections and so forth.  It would be interesting, for example, to give people only the names and areas of study on this map and see how they arrange them.  I am sure that, while common patterns of arrangement would emerge, major differences would exist, never to be resolved.

Third, it is clear that, far from slowing down, the complexity sciences are advancing at an incredible speed, as this field's various approaches to modeling the topics of science are taken up across the academy!  It is very exciting to watch and map this progress, as the work scholars are doing is just incredible!

So, let's think of this map as an evolving dialogue (with the appropriate paper-trail) if you will: a debate, an argument, or (better yet) a charted negotiated ordering that has emerged through our complex interactions with the larger scientific history of which we are a part.  As such, I am sure that Version 10 of the map, to my own detriment (Ha!), is not too far off in the immediate future.  phew!