This post is the 6th of several devoted to addressing the complex challenges of modelling the coronavirus as a public health issue. It is also about clarifying for a wider audience how and why such modelling is important, as well as the value and power of complex systems thinking and computational modelling for public health policy. 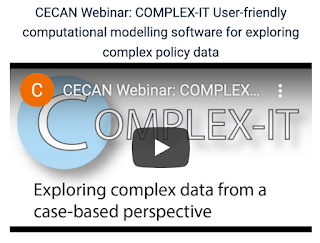 COMPLEX-IT: Software for Modelling Complex Multiple COVID-19 Trends
Recently my colleagues Peter Barbrook-Johnson and Corey Schimpf did a webinar for the Centre for the Evaluation of Complexity Across the Nexus (CECAN) on how to use our modelling software, COMPLEX-IT, for exploring complex multiple regonal trends of the cumulative incidence of COVID-19 cases across a given period of time.
We are sharing the webinar here for those interested in seeing how this software can be used to help with understanding the spread fo COVID-19 in a way that is in line with the previous five blog posts I've done on how best to approach modelling these types of public health problems.
COMPLEX-IT
For those interested in exploring COMPLEX-IT, our website has an beta online and downloadable version, as well as tutorials and readings. Note: this is educational software for learning purposes only. To explore COMPLEX-IT CLICK HERE! 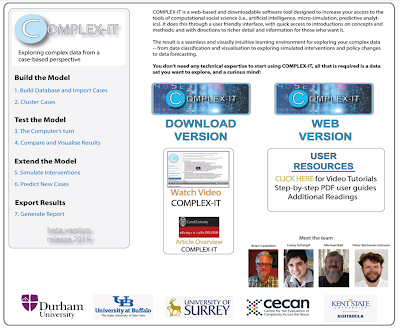 Posted by Brian Castellani at 15:32 No comments:

This post is the 5th of several devoted to addressing the complex challenges of modelling the coronavirus as a public health issue. It is also about clarifying for a wider audience how and why such modelling is important, as well as the value and power of complex systems thinking and computational modelling for public health policy.
THE IMPORTANCE OF INTERDEPENDENT LOCAL/NATIONAL MODELLING
Recently my colleague, Camila Caiado and I published a piece in The Conversation, titled appropriately enough Coronavirus: why we need local models to successfully exit lockdown

The piece outlines an argument that we are by no means alone in making. In fact, it is something argued widely in the computational, statistical and complexity sciences as well as the complexities of medicine and health literature.
Basically, the point is that national modelling of COVID-19 (whatever the country) needs to rely in very significant ways on modelling at the local level. And by local we mean all the way down in granularity from the regional and county level to the city and community. In short, we need a complexities of place approach.
This need for local and regional models (inerdependent with each other and the national) is in addition to the need for a dashboard of multiple models -- which was a major point of my previous four posts in this series.
The value a local approach (when combined with the national) is significant.
Here are some highlights:

First, as shown in Figure 1, it allows us to monitor how a public health problem like COVID-19 evolves at different levels of scale. National trends may not reflect local trends; and basing local decisions only on national trends (and without including the local) can be misleading and detrimental, particularly in terms of how resources are allocated or local public health and how public policy decisions are made.
Second, it allows us to model and monitor how such public health issues evolve along multiple and different pathways. For example, as shown in Figure 2, while a virus like COVID-19 might spread quickly and widely in one region or city resulting in a major spike or wave, in other areas is may evolve slowly or never peak at all.
Third, as shown in Figure 3 below, it allows modelling to be case-based and cross-comparative, so that stakeholders can explore similarities and differences in major and minor trends within a country, and at different levels of scale. Such comparisons can also be extended across countries -- but only if context is taken into acount, which goes to the next point.
Fourth, it honours and is grounded in the massive impact that context has on how a public health issue like COVID-19 impacts a particular place.
Context can be thought of as not just social, economic, political and cultural but also ecological and environmental; and impact here can be thought of in several ways (this is not an exhaustive list):
Fifth, to reiterate the point, it acknowledges that we need a dashboard of multiple models. Not only do we need regional models, but even then we need more than one. Agent-based models, deterministic models, machine learning models, statistical models, and historical models that help to widen our understanding of the lived experiences and historical nature of the public health issue being examined.
Sixth, it is entirely grounded in the reality that local areas are interdependent, interconnected and interactive. Local modelling is not a pretext for another form of isolated thinking, where the only concern is the immediate community. Instead, the focus is to think global but model local. All local models need to recognise a region's interdependence with other nearby and distant regions as well as the national and international. The global spread of COVID-19 has basically shouted this point!
Seventh, it allows for a more complex systems approach to public policy. Such an approach includes developing policies that are sensitive to context and to multiple path dependencies and outcomes, which are taking place at different levels of scale. It also includes policies that recognise that any public health intervention, no matter how simple, takes place in a wider ranges of interdependent complex systems, resulting in knock-on effects and so forth. For more on the policy aspect, see the work my colleagues at CECAN (Centre for the Study of Complexity Across the Nexus) to develop the 2020 Magenta Book supplementary guide, Handling Complexity in Policy Evaluation.
Eighth, such regionally grounded, locally focused, and nationally and internationally connected policy-based modelling needs to be co-produced with key public and private stakeholders!
Co-production leads to better modelling for several reasons. First, the models can be designed in direct response to the needs of a community or region. Second, they allow for more immediate feedback and learning. And, third, what is modelled – as in the case of the agent-based model we have created – can be adapted as new or different insights are needed. For example, in March and April the main question of concern in the UK was if, when and where the peak would be achieved. Now, as many countries are easing social distancing, the concern is how various exit strategies (or going back into shelter-in-place) will impact the spread of the virus? For us, the obvious answer is that it will depend entirely upon context -- and also the interdependence of one context with another! Communities therefore need regional models, alongside the capacity to adapt national policies into local strategies, so they can make more contextually sensitive decisions that reduce rather than produce increased health harms and inequalities.

These, then, are my general recommendations -- and ones my colleagues in the COVID-19 Community Health and Social Care Modelling Team would agree with. Again, we do not pretend to have the only or best answer to the current situation; and, despite the need for regional modelling, we still support the importance of national level modelling and a national strategy. But, to reiterate our point, if we are to take the next step in this worldwide modelling challenge, we need a more diverse set of models that are more sensitive to and emerge out of not just the national, but also the local and the complexities of its socio-ecological context. Looking to the near future, such a modelling-public-policy dashboard is most likely to become even more important, as COVID-19 is probably the first in a series of global social and health problems we are about to face.

About the Durham COVID-19 Modelling team

The COVID-19 Community Health and Social Care Modelling Team is under the guidance of our respective Executive Deans, Jacqui Ramagge (Science) and Charlotte Clarke (Social Sciences and Health) as part of the contribution of the Wolfson Research Institute for Health and Wellbeing and the Institute of Data Sciences to the University’s Health@Durham strategy, as well as supported by the Research and Innovation Services, Marketing and Communications and CECAN (Centre for the study of Complexity Across the Nexus). The team is led by Dr Camila Caiado and Professor Brian Castellani, with the purpose of creating a series of tools and dashboards that Trusts and Councils can use to help support decision and planning accordingly. We would also like to acknowledge the outstanding contribution of Dr Jennifer Badham, Dr Peter Barbrook-Johnson, Professor Amanda Ellison, Dr Andrew Iskauskas, Dr Rachel Oughton, Dr Corey Schimpf and Dr Bernard Piette.