In a previous post--click here to see--I discussed Pinker's new book The Better Angels of Our Nature: Why Violence has Declined in terms of the interest it holds for a complexity scientists working in the social sciences.

The main issue I concentrated on was his argument that, not only has violence decreased over the longue durée of human history and, more specifically, the last 20 years of globalization-induced history, but that this decrease is scale-free, from attitudes on spanking children to wars. I took issue with this argument, pointing out that it is probably much more scale-dependent and context-sensitive than he makes the argument to be.  (Again, remember, in the spirit of Foucault's approach to polemics, the point of my posting on Pinker's book is to think from a complexity perspective to see if it fosters new ideas, not to tear down the work of someone else.)

I spent the next few days thinking, and I have another issue regarding this notion of violence being relatively scale-free that I wanted to address: the fact that Pinker's argument is variable-based--a perspective that case-based complexity scientists such as Charles Ragin and David Byrne, amongst others, seek to avoid. (To read more about their views, see their latest edited book, The Sage Handbook of Case-Based Methods.)


Byrne's work, for example, specifically focuses on the intersection of complexity science and case-based method.  The premise upon which his work is based, while simple enough, is ground-breaking: in the social sciences, cases are the methodological equivalent of complex systems; or, alternatively, complex systems are cases and therefore should be studied as such.  With this premise, Byrne adds to the complexity science literature an entirely new approach to modeling complex systems, alongside the current repertoire of agent (rule-based) modeling, dynamical (equation-based) modeling, statistical (variable-based) modeling, network (relational) modeling, and qualitative (meaning-based) method.


If you think about it, complex systems cannot be studied as a collection of variables.  How, for example, do you study the adjacency or proximity (dissimilarity) matrix of a set of variables?  Systems are made up of agents and structures and environmental forces (top-down, bottom-up, and any other direction you want to consider) which, together, are best conceptualized as cases: configurations of variables that, together, form a self-organizing emergent whole that is more than the sum of its parts, and is nonlinear, dynamic, path (context) dependent and evolving across time/space.  Ragin goes even further: stop thinking of variables as variables; they are sets.  Violence, for example, is not a variable.  Violence is a set--fuzzy or crisp--into which cases represent degrees of membership.  For example, thinking of Pinker's study, "war in the 1800s in Europe" is a case, along with another case such as "war in China in the 1800s."  Both cases could be placed in the set "macro-level violence through war."  Membership in the case could, at least initially, be defined in terms of basic rates, as Pinker uses, or converted into boolean or fuzzy set membership.
But the key point here is that they are different: they are each a case, a different, context-dependent case, which one will explore, in terms of their respective configurations, to find similarities and differences; and it is this comparative approach that will draw out the context-dependent causal similarities and differences amongst these cases.   For example, in relation to Pinker's work, one may find that violence has gone down in both cases, but the reasons for the decrease in violence is different, based on differences in configuration.

Why is something like this important?  Consider policy recommendations.  Insensitivity to configurational differences, context and, ultimately complexity is the failure of much policy--see, for example, Applying Social Science by Byrne.

Following this argument, violence, as a complex system, reconfigured at multiple levels of scale, can be defined as a set, comprised of multiple sub-sets, each representing a type and scale of violence, from the macro to the micro.  Each set is comprised of cases, which are configurations, which take into consideration context and difference.  Such an approach allows one to talk about violence in a much more sophisticated way.  For example, one could show how violence is increasing and decreasing, for example over time; contradictory trends.  The macro-level violence of war in Europe during the 20th century is not the same thing as the macro-level violence of war in China or Africa or South America or between hunter and gathering tribes or war amongst smaller empires.  They constitute different cases, different forms of macro-level violence.  Studying violence this way allows us to ask much more specific questions: which forms of government or social organization in which particular contexts, for example, lead to less war?  Which forms of government or social organization in which particular contexts lead to less micro-level, face-to-face violence?  And, so forth. 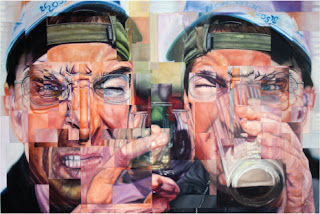 This is a painting i recently completed called Two Douche-bags; Or, Toast This!  It is a comedic homage to jerks everywhere who, by definition, think they are more incredible then they actually are.  It is also a good example of my exploring complexity through assemblage, as it is the same set of integrated images of my nephew and brother-in-law on both side, except the one on the right was inverted and developed to become something different. 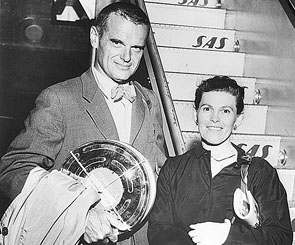 I am a huge fan of the work of Charles and Ray Eames and have been waiting for their complexity science, postmodern equivalent.  Anyway, my wife sent me this link to a new documentary on them.  It looks great:http://www.midcenturia.com/2011/10/eames-architect-and-painter-film.html
Posted by Factory Wiz at 14:50 No comments: