What Does 6-Degrees of Separation Mean? Or, why sociology is important to complexity science

In the 2002 January/February issue of Society, Judith Kleinfeld published an interesting article titled "THE SMALL WORLD PROBLEM." Kleinfeld's article is an excellent review and critique of the small-world problem--the idea that, in very large social networks everyone is connected to everyone else in the world by 6 or fewer links. The reason: networks are not random; instead, they contain weak-ties sufficient to link up everyone.

More important, Kleinfeld's article demonstrates the importance of sociology to complexity science. While physics can be used to study society, it needs sociology. Social systems are not physical systems--for the record, Watts agrees with this point (See Watts 2004).

For example, while a poor, female living in Mexico may be separated by less than six-degrees from a rich male living in Germany, it is very unlikely this poor female can make use of her links the same way someone of a higher socioeconomic status could. Sociology (and social network analysis, specifically, along with the study of kinship networks and health) has a lot to say about the quality of the connections in large social networks--above and beyond such terms as weak and strong ties, triangles, centroids, clusters, etc.

A whole language (all of it sociological, and much of it within social network analysis) awaits to be intersected with the new science of networks. This language includes community health, inequality, social stratification, medical sociology, gender, occupations, etc.

To learn more about the sociological approach to the new science of networks, see Barry Wellman's website and the INTERNATIONAL NETWORK FOR SOCIAL NETWORK ANALYSIS, See also Kleinfeld's COULD IT BE A BIG WORLD?
Posted by Brian Castellani at 21:27 No comments:

What Happened to Neural Networking?

Back in the 1990s artificial neural networking was everywhere. The number of conferences, journal articles and grants devoted to its exploration was phenomenal. Then, suddenly, it seems, everyone moved on. Now, the rage is social networks.

I am not saying neural networks has been completely dropped. There is still some exciting stuff going on. But, it just never got integrated into the mainstay of complexity science method the way one would think.

One particular area that has yet to be fully appreciated by complexity scientists is Kohonen's self-organizing map--known as the SOM.

The SOM represents the latest advance in what can be called "qualitative computing."

By this term I mean that, the SOM is ready-made for finding nonobvious patterns in very large, complex digital, numerical databases. However, unlike statistics, the SOM is not driven by traditional hypotheses; it is not governed by the linear model; it searches for patterns of difference rather than aggregate norms and trends; it focuses on the relationships between conceptual indicators rather than the most powerful single variables; and, most important, while “intelligent,” it is actually dumb: the SOM does not tell you why it arrived at the results it gives you. There are no t-tests of significance to tell you what you found.

Instead, the SOM's output is open-ended, visual, and intuitive. To make sense of the nonobvious patterns and trends found, the researcher must apply traditional qualitative techniques--including coding, memo writing, and theoretical sampling. The qualitative orientation of the SOM does not mean one does not use statistics or formal mathematical modeling. I use these techniques all the time with it.

But, it does mean that the SOM is both computational and qualitative--a rare thing in method.

The SOM can do all of this because it is essentially a data reduction technique--while preserving the complexity of a system, it reduces its complexity to a 2-dimensional grid, onto which it projects the nuanced relationships between a set of factors. One combs this grid and the underlying factor structure to determine the dominant ways a data set clusters and the set of factors responsible for this clustering.

So, why aren't complexity scientists, particularly those in the social sciences, using the SOM? I do not know. Perhaps there is just so much going on that we have not reached an integration point. A method is explored, applied, developed and then everyone moves on to the next big method. Complexity science has not reached the point where multiple methods are combined to create a toolkit.

The other reason I think the SOM is not widely used, particularly amongst social scientists, is because of the geek factor involved. For example, I run Kohonen's free-ware program--the SOM Toolkit--in Matlab. If you cannot program your own neural net or you are not comfortable with Matlab or other programs with a high geek factor, it can be a bit overwhelming making use of this method. That, more than anything, is probably the unspoken reason neural nets and the SOM have not made a major splash in the social sciences. They are not overly easy to use.

They also do not fit the traditional paradigm of being numerical and quantative. Social scientists have an emotional breakdown when a method cannot be classified as qualitative or quantitative. Worse, if a numerical method does not have a t-test or some exact statistical way of determining the significance of its results, they just lose it! :)

Again, I am not saying that the above types of work are not being done. I'm just saying that it seems more could be done.

What do you think?
Posted by Brian Castellani at 13:19 No comments:

I have been following an excellent complexity science blog for the past couple of weeks. It is called COMPLEXITY BLOG and it is run by two graduate students at the University of Michigan, who are affiliated with the university's international and renown Center for the Study of Complex Systems.

The two students are Kenneth Zick and Aaron Bramson--although the majority of recent posts are all by Bramson.

What is excellent about the site (even for undergraduates) is its cross-disciplinary viewpoint and breadth! For example, in addition to the blog, they provide a host of additional resources, which includes just about everything a student needs--from maps of the schools with complexity science programs to an excellent glossary to a good overview of all the major centers in complexity. I looked over their stuff and it is authoritative. You will not be led in the wrong direction.

I strongly recommend including this blog in your favorites! I put it in mine.
Posted by Brian Castellani at 18:10 No comments:

Several years ago I came across an excellent educational website on complexity--at a time when few such websites existed. In the late 1990s you basically had the Santa Fe Institute Website and a few other things.

Then came along CALRESCO, which stands for the Complexity & Artificial Life Research Concept for Self-Organizing Systems. If you typed on Google or any other web browser words like "complexity" or "complex systems" the top hit was from CALRESCO.

Now, Wikipedia dominates, which is a good thing. Survivial of the fittest! However, the drawback is that an excellent educational website is getting less attention.

What makes CALRESCO so good is the level of detail. When I was first learning the numerous concepts of complexity science, CALRESCO not only provided excellent information, but it had lots of papers I could download to read, and they were at a basic level without being basic--does that make sense?

Anyway, if you want to get a good grasp on the basic cocnepts of complexity science, I recommend making this part of your favorites list.
Posted by Brian Castellani at 13:17 No comments:

If you are looking for excellent books and journals on complexity, you have to check out the Springer Complexity Series

I took the following paragraph directly from their website:

About this series
Future scientific and technological developments in many fields will necessarily depend upon coming to grips with complex systems. Such systems are complex in both their composition (typically many different kinds of components interacting with each other and their environments on multiple levels) and in the rich diversity of behavior of which they are capable. The Understanding Complex Systems series (UCS) promotes new strategies and paradigms for understanding and realizing applications of complex systems research in a wide variety of fields and endeavors. UCS is explicitly transdisciplinary. It has three main goals: First, to elaborate the concepts, methods and tools of self-organizing dynamical systems at all levels of description and in all scientific fields, especially newly emerging areas within the Life, Social, Behavioral, Economic, Neuro- and the Cognitive Sciences (and derivatives thereof): Second, to encourage novel applications of these ideas in various fields of Engineering and Computation such as Robotics, Nanotechnology and Informatics: Third, to provide a single forum within which commonalities and differences in the workings of complex systems may be discerned, hence leading to deeper insight and understanding. UCS will publish monographs and selected edited contributions from specialized conferences and workshops aimed at communicating new findings to a large transdisciplinary audience.
Posted by Brian Castellani at 18:55 No comments: 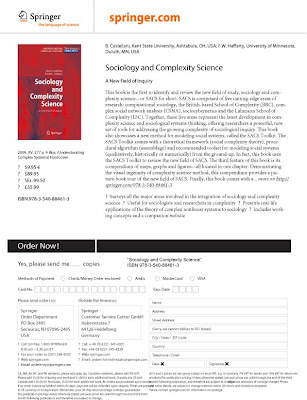 My new book, Sociology and Complexity Science: A New Field of Inquiry was released by Springer on 4 Feb 2009. The book is part of Springer's complexity series.

To go to the book at Springer, CLICK HERE
Posted by Brian Castellani at 18:47 No comments:

If you want a quick overview of sociology and complexity science and its major areas of study, see the Wikipedia article I recently posted on Wikipedia.
Posted by Brian Castellani at 18:43 No comments:

If you type in COMPLEXITY at Wikipedia, you will find my new map of complexity science there along with the article. 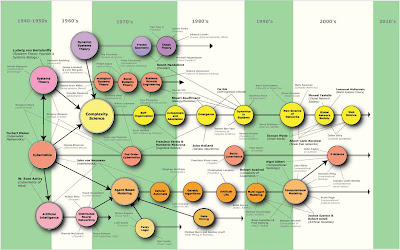 I just put together a new internet-based map of the field of complexity science, including all its major areas of study, leading scholars and intellectual lineage. It is an excellent resource for learning about complexity. In fact, I will make use of this map throughout my postings. CLICK HERE TO VISIT THE MAP
Posted by Brian Castellani at 17:58 No comments: