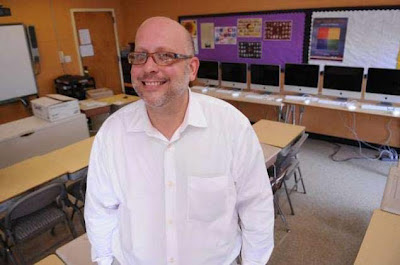 This was in the Daily News today.  My brother Warren is Head of School at the Lutheran School of Flushing and Bayside, Queens NYC, USA.  He and his colleagues have been slowing transforming their school into a technology-based, globally aware parochial school.  Way to go Warren!

CLICK HERE to read the article
Posted by Factory Wiz at 14:21 No comments:

Our latest article on case-based modeling and its utility for modeling complex systems just came out in early view for the journal Complexity.


Recently, the continuity equation (also known as the advection equation) has been used to study stability properties of dynamical systems, where a linear transfer operator approach was used to examine the stability of a nonlinear equation both in continuous and discrete time (Vaidya and Mehta, IEEE Trans Autom Control 2008, 53, 307–323; Rajaram et al., J Math Anal Appl 2010, 368, 144–156). Our study, which conducts a series of simulations on residential patterns, demonstrates that this usage of the continuity equation can advance Haken's synergetic approach to modeling certain types of complex, self-organizing social systems macroscopically. The key to this advancement comes from employing a case-based approach that (1) treats complex systems as a set of cases and (2) treats cases as dynamical vsystems which, at the microscopic level, can be conceptualized as k dimensional row vectors; and, at the macroscopic level, as vectors with magnitude and direction, which can be modeled as population densities. Our case-based employment of the continuity equation has four benefits for agent-based and case-based modeling and, more broadly, the social scientific study of complex systems where transport or spatial mobility issues are of interest: it (1) links microscopic (agent-based) and macroscopic (structural) modeling; (2) transforms the dynamics of highly nonlinear vector fields into the linear motion of densities; (3) allows predictions to be made about future states of a complex system; and (4) mathematically formalizes the structural dynamics of these types of complex social systems.

Recently, I posted on art, complexity and global politics, via my review of the work of artist/architect Saraceno and philosopher/sociologist of science, Latour. CLICK HERE FOR MY POST

As a followup, below is an example of my point about the powerful link between art, culture, politics, and cyberinfrastructure via Castell's network society.

In quick summary, on March 3, 2012 Maria Alyokhina, Nadezhda Tolokonnikova and Ekaterina Samoutsevitch, three alleged members of Pussy Riot, were arrested by Russian authorities and accused of hooliganism for performing a punk song in a key Russian Cathedral.  Their video of the event went viral, causing a global network chain reaction.

In response, people and groups from around the world, such as 121 members of the German Parliament--the Bundestag (see their comments here)--and artists (particularly musicians), began speaking out.  For example, organizations, such as Amnesty International--read their views here--agree with the German Parliament, seeing the arrests as examples of decreasing tolerance in Russia for artistic expression, particularly when it flies in the face of political and cultural convention, and are putting pressure on Russian authorities to treat these women appropriately and provide them their legal rights.

My favorite response is by the Red Hot Chili Peppers--one of my all-time favorite bands, who sing a lot about artistic and cultural freedom (for example, Shallow be thy game--CLICK THIS LINK AND BLAST THE SONG)--wore shirts of the band and wrote letters while performing in Russia recently.  In turn, this network society response has put pressure on the Russian government.

Here is a British broadcast on YouTube about the event, including a response by Vladimir Putin.