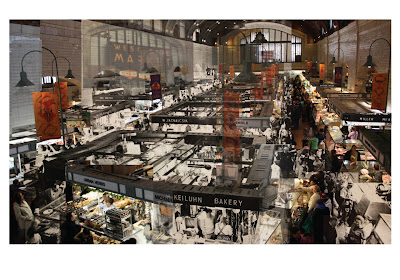 This photomontage highlights how Cleveland’s past is part of our present moment and how, in many ways, our city’s past remains alive for us, if we only take a moment to look. The focus of this montage is one of Cleveland’s most important landmarks, the Westside Market. Located at the corner of West 25th Street and Lorain Avenue, Cleveland’s Westside Market has been in business since 1840.

TO PURCHACE A COPY OF THIS PHOTO, "CLICK HERE"

Description of the Photomontage
The photos in this montage were taken at two different points in time. The black and white photos were taken circa 1970, courtesy of the Cleveland Public Library. The color photographs were taken in 2010 by the artist.

Some things stay the same: Much of the Westside Market, despite the many years, remains the same: fans on walls, posters, light fixtures, etc. What is odd about these remains is that, while some are very important, others continue for no apparent reason. It is as if somebody forgot about them or nobody ever thought to take them down. In the far left side of the picture, for example, is a really old fan. Why is it there? Does it still work? It begs the question about how history comes to us; perhaps, sometimes, as remains or leftovers from the past; things people forgot about or were too busy to clean up. Funny! Then there are those things that remain because of the important value they hold: the architecture, style of the booths, etc. Perhaps the best example is the old steer’s head on the butcher’s booth in the lower left side of the picture—it is still there, some 40 years later.

And then things change: History is not just the study of the past; it is also the study of how things have changed. Much has changed at the Westside Market over the last 40 years. For example, looking at the montage, it appears that the only booth from the 1970s that is still operating today is Fernengels—see the middle right side of the photograph. Other changes can be found in the montage as well: clothing styles, eyewear, hats, the types of produce sold in the booths, etc. If one had enough time, a rather interesting anthropology of Cleveland’s culture could be constructed from this montage.

Similarities and differences aside, the people in these photographs all seem to be enjoying the same thing: the food! Food is such an important part of our lives, and places like the Westside Market struggle to keep the “open-market” approach going—not an easy task in a world full of suburban-based, giant-sized, high-convenience food stores. It is great to see the Market still thriving after all these years! Long live the traditions of Cleveland.
Posted by Factory Wiz at 02:03 No comments: