I am happy to say that the health and social theory group in the Sociology Department at Durham University has launched a new website.  On it you can find out about our latest research, key themes, and an overview of different staff (particularly for post-graduate students thinking about doing their doctorate or post-doctoral research at Durham).

Here is the link: DURHAM HEALTH AND SOCIAL THEORY GROUP


Posted by Brian Castellani at 11:56 No comments:

Is Public Health Ready for Complexity?

For those in attendance, here is a LINK TO THE PRESENTATION.  Also, more generally for readers, here are the main six points I made, which I hope others find useful in advancing the usage of the complexity sciences in public health.

IS PUBLIC HEALH READY FOR COMPLEXITY?

Public health, presently, is at a difficult crossroads.  Its massive success in making the world a healthier place has led to a global embrace of its incredible insights; but still, the challenges currently faced have not given in so easily, as they are deeply entrenched complex problems -- or, alternatively, what are more generally referred to as wicked problems!  ~The global spread of infectious disease; an exponentially growing (or, alternatively, greying) population throughout many parts of the world; the negative impact ecological upset is having on climate and health; urbanization and the development of mega cities and metropolitan regions; the increasing costs of health and healthcare; air pollution; the opiod epidemic; and so forth. 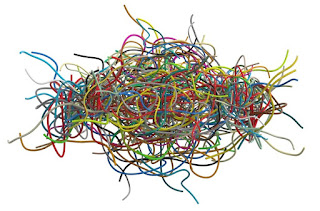 Still, despite this increasing complexity, public health has been rather resistant to making the shift, falling back on tried-and-true ways of thinking about and modelling public health issues.  This is particularly true when it comes to the harsh realities of getting funded or published!!!!!  This needs to change!  The challenge, however, is how?

Here are, in my mind, six things that public health researchers and practitioners can do to make more efective usage of the complexity sciences and advance the usage of these ideas across the field:

Six ways to advance the study of complexity in public health

There are six key issues that public health needs to address to move forward regarding the issues of complexity: