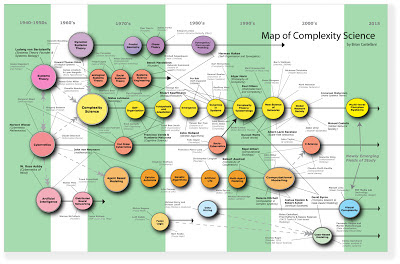 As you can see above,  I have updated my map of the complexity sciences.

My current edits are based on my autumn sabbatical at Durham University, in the UK.  I have spent a lot of time working with and talking to complexity scientists from as far ranging fields as quantum mechanics and neuroscience to business administration and health care to philosophy and the arts--all of which has led to my new version.

First, I have included the field of visual complexity.  As those who follow this blog know, I have spent considerable time discussing the influence of complexity science on the arts and how visual design is advancing how we organize and understand the massive globalized world of data in which we now live.  This is an important new area of emerging investigation.

Second, I have highlighted Hermann Haken and his work in the field of synergetics.  It appears that, within the past couple years, a movement has re-emerged within dynamical systems theory where complexity researchers are thinking, once again, about the macroscopic as a way to dampen or manage the high levels of complexity in a system, primarily by rethinking micro-level interactions and their rules at the macro level.  One example is the recent paper that my colleague, Rajeev Rajaram and I published in Complexity--click here.

Third, I added the field of case-based modeling, based largely on the internationally renowned work of Charles Ragin in case-based reasoning and David Byrne in case-based complexity and complex realism.  This is a major, major movement in the social sciences and in applied areas like health, business, education and political science.  It is also a significant advance in complexity method, adding an entirely new way of thinking about complex systems as cases.

Fourth, I added the field of multi-level complex systems.  This is where I think a huge segment of complexity science is headed.  We need to find ways to model systems at multiple levels, taking into account agency and structure.  And, we need to move to the usage of multiple methods.  A good example of this advance in thinking and its financial support is the European Union's initiative on multi-level complex systems--Click here.

Finally, I added a few more long-deserved names to the list, including Eshel Ben-Jacob and Nicholas Christakis and Bruno Latour (on whom I have been blogging lately).

As always, no map is perfect and I am sure people will let me know.  But, I am always working on it.