Complexity Theory, Managerial Science and the Problems of Definitions 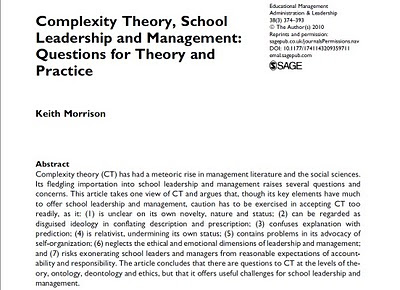 This post continues my discussion about the challenges associated with how one goes about testing the validity and utility of the particular definition of a complex social system one uses.

I ran across an excellent article in the journal Educational Management, Administration and Leadership by Keith Morrison, titled Complexity Theory, School Leadership and Management: Questions for Theory and Practice [2010, 38(3):374-393]. Morrison has written extensively about the utility of complexity science for the field of education, primarily in terms of leadership issues.

What makes the article so good is that it rigorously deconstructs how the management literature fails to effectively distinguish between the metaphorical versus prescriptive versus descriptive use of the term complex system. Too often (and I personally think almost always) scholars in the management and leadership literature (particularly in the field of education) write about a phenonomena such as autopoiesis as if they can move back and forth between their various uses of the term. For example, in the same argument they will treat autopoeisis as something that is real, something you can cause to happen, or just a really cool way to see things. Or, one finds these scholars saying such things as "Principals needs to teach their faculty to think of their schools as complex, self-organizing systems, because schools are alive and autopoietic, so that they can create a nonlinear learning environment." What does such a sentence mean? Can a school be alive? Can you create a nonlinear working environment? What would such an environment be--one where lots of work leads to little change; or little work leads to sudden great change?

The above sentence is the type of conflated intellectual sloppiness that Morrison addresses in his article. I hihgly recommend reading it.
Posted by Factory Wiz at 18:52 No comments:

This post continues my discussion about (1) the need for researchers to be clear about the definition of complexity they use and (2) to make sure that they test or demonstrate that the system they are studying actually meets the criteria of their definition.

As I have said in previous postings, I am not advocating a strict realist definition of complexity, such that the definitions researchers use and then test have to reveal the fundamental reality of the object they are studying as complex. One can use complexity as a metaphor (as in the case of postmodern complexity), as a proactive concept (as in the case of the leadership literature) or as a empirically useful way of describing something (as in the case of the natural and artificial sciences). What I am saying, however, is that one's definition should be rigorously applied.

My second and related point is that we need rigor in our definitions to bring together the otherwise disparate areas of study in complexity science. Synthesis in complexity science will not come through the construction of a singular definition. Instead, synthesis will come from researchers empirically, proactively, or metaphorically demonstrating that the definitions they use form a gestalt--a whole that is greater than its parts. And, it should be clear to readers and fellow researchers how the components of one's definition go together.

As a final point, researchers need to be careful that they do not move in and out of empirical to proactive to metaphor in their definitions. To me, this type of intellectual slippage is one of the major ways that scholars in the social sciences and humanities get into trouble with their usage of complexity science.

For example, a scholar will empirically demonstrate how a particular system of study is self-organizing. With this success, the scholar will proceed to make a whole bunch of additional definitional assumptions that the proof of self-organization means the system is also agent-based, network-like in structure, and nonlinear (one of the most misused mathematical terms by social scientists and humanities scholars). The term nonlinear, for example, is almost always used in a metaphorical way by social scientists and humanities scholars, to suggest that a social system is messy, not easily managed or controlled or not easily understood via statistical method. In actuality, nonlinear means that the system or, more specifically, the equation or equations used to understand a system are such that their output is not directly proportional to their input. In other words, when the term 'nonlinear' is used in a realist sense, it means that the system being studied and the factors of which it is comprised cannot be written as a linear combination. Furthermore, as a system, these equations are therefore usually impossible to solve, except through computational methods that provide proximate solutions; and the problems are often unstable, that is chaotic, operating near chaos, etc. So, if the researcher has empirically demonstrated that a system is self-organizing but uses the term nonlinear in a metaphorical manner (which may be close to its correct usage but not quite), then the researcher is really causing definitional confusion through a lack of rigor and clarity. For such a researcher to proceed to response to critics (who are rightfully confused) by arguing that the lack of clarity in his or her work is a function of studying complexity--when it is really a failure in the usage of some of the components in her or his definition--is to perpetuate rather than solve the problem they are working so hard to address.
Posted by Factory Wiz at 16:18 No comments: 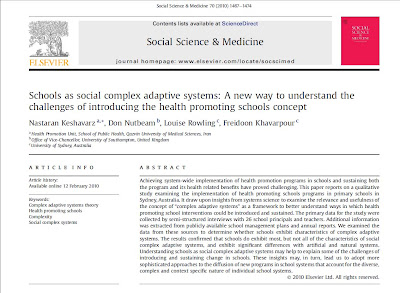 As regular readers of this blog know, I am currently working on a community health study with my colleague, Galen Buckwalter, wherein we are testing to see if the complex system definition used by current researchers has any degree of cohesion and if this definition, in its totality, applies to the typical community of study. I am also working on a study of public school systems with my brother, John Castellani, who is at Johns Hopkins, to see if and how best a public school system can be conceptualized as a complex social system.

In my literature review, I came across the following article. In the 2010, Volume 70Issue 10 edition of Social Science and Medicine, Keshavarz, Nutbeam, Rowling and Khavarpour published their empirical article, “Schools as Social Complex Adaptive Systems: A New Way to Understand the Challenges of Introducing the Health Promoting Schools Concept."

The article fits with my recent discussions about definitions because the goal of the article is to determine the “relevance and usefulness of the concept of ‘complex adaptive systems’ as an approach to better understanding ways in which health promoting school interventions could be introduced and sustained” (p. 1468).

To arrive at their definition of a complex social system, they reviewed the literature. For them, a complex social system—which they call social complex adaptive system—is comprised of a key set of characteristics, which they list on page 1468 of the article. I will not review these characteristics here. Suffice to say, they did what I have been talking about: they outlined a definition and proceeded to use empirical data to determine if their system of study (a school system) meets the criteria of their definition. They used two data sources: public school reports and qualitative interviews.

Using this data, they went through each component of their definition to see if it provided them an empirically relevant and useful way of thinking about their educational system of study. Related, their ultimate goal was to see if the utility of each component lent itself to an improved way of understanding how health promotion programs should be implemented. In other words, if schools can be adequately framed as complex systems, then what does each component of their definition add to their understanding of how health promotion should be effectively accomplished.

In addition to their attempt to empirically examine the utility of their definition, toward the end of their article they outline many of the issues I have been discussing lately. On pages 1472-1473, they state:

"Utilising complex adaptive theory to guide enquiry into a discrete phenomenon (such as a health promoting school) is a challenging task, in part due to the complexity of the theory itself, and in part because of the continuing uncertainty on a clear definition of complex adaptive systems (Rickles et al., 2007; Wallis, 2008). While there has been a recognition of complexity, and steady increase in the use of complexity theory in the study of health care and public health interventions (Keshavarz, Huges, & Khavarpour, 2005; Resnicow & Page, 2008; Shiell et al., 2008) there has been relatively little critical analysis of the concept, and no single and clear account of the components of complex adaptive systems theory and how these components relate to each other (Dooley, 1997; Rickles et al., 2007; Wallis, 2008). Furthermore, as Chu et al. (2003) argue there are few experimental studies that test complexity theories, and there exists even less research into practice informed by the insights that might be provided by complexity science. Correspondingly, application of a complex adaptive systems framework to a social system requires considerable caution, but suggests the need for continued exploration."

-----------------
What makes the article by Keshavarz, Nutbeam, Rowling and Khavarpour even more important to read is that it was followed by a Commentary by Tamsin Haggis, who provided her own very sympathetic yet useful and critical reading of their article. In turn, the first authors were allowed to published their response to Haggis' critique.

Rather than make a case for which argument I think wins out in the end, I recommend others go read the articles and decide for themselves. Actually, I think both sides have some important points to make, and it is not really a matter of who wins, but how their arguments work together to help make some important advances.
Posted by Factory Wiz at 13:16 No comments: