The Limits of Social Engineering: A Complexity Science Critique


There is a new book out by Alex "Sandy" Pentland. 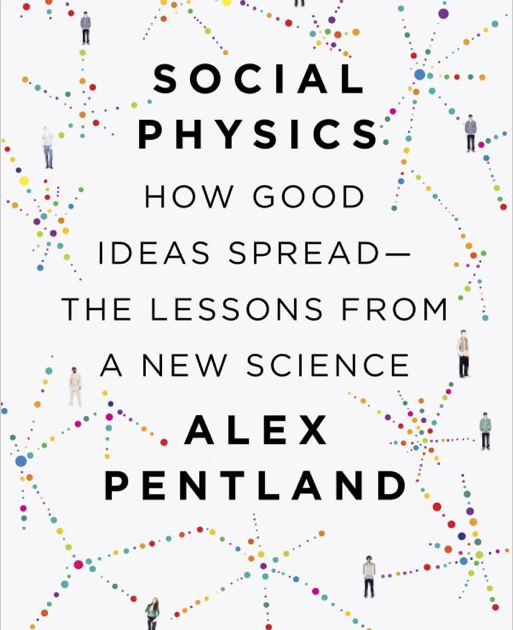 I locate Pentland and his work on my map of complexity via visual complexity and data science--Click here to See.

The title of Pentland's new book is Social Physics: How Good Ideas Spread -- The Lessons from a New Science.

It is a fascinating read and full of very provocative and interesting ideas, to which a number of reviewers have responded very positively.  I agree with these reviews that there is a lot that can be learned from this book  -- but I think these lessons come in the form of both possibility and also humility.

Given that so many reviewers have focused on the possibility component, let me speak to the humility part.

While a bit of history is provided in his book, the term social physics has a much deeper history than Pentland gives credit, going all the way back to the philosopher and scientist August Comte, and even a bit further to the scholar who first coined it, Adolphe Quetelet.  Like Pentland, these figures had similar ambitions for a new science of society.

Of the two, however, the terminology of Quetelet would fall into disuse.  Do not feel bad, though, as his ideas would be revived in the 1940s and 1950s, through the invention of the new fields of systems science and cybernetics, which would lead to second-order cybernetics and such famously exciting and provocative, but disastrously overreaching works of great genius as Norbert Wiener's The Human Use of Human Beings.

These works were exciting and provocative because they hailed (albeit pessimistically so) the new information-driven, post-industrial, global network society in which we now live, grounded in a complex intersection between humans and machines (cyberinfrastructure)--click here for more!  Wiener states:  "It is the thesis of this book that society can only be understood through a study of the messages and the communication facilities which belong to it; and that in the future development of these messages and communication facilities, messages between man and machines, between machines and man, and between machine and machine, are destined to play an ever-increasing part." (p. 16)

But, they were disastrously overreaching, as they placed the future understanding of humans in their own machinery.  In other words, despite their best inventions, which included embracing a complex systems view of life, they failed to recognize, in their hubris, the shear complexity of the human condition, no matter how sophisticated the machinery!

Nothing, however, was going to slow down such technological innovation.  And so the world changed.

In fact, as our information-driven society evolved, the work of Wiener and others would likewise evolve, through their intersections with a wide variety of fields and innovative thinkers, to become the new complexity sciences -- which are fast becoming simply the sciences!!!  Again, the challenge of these new sciences will be, in part, how well they learn the lesson of limits. 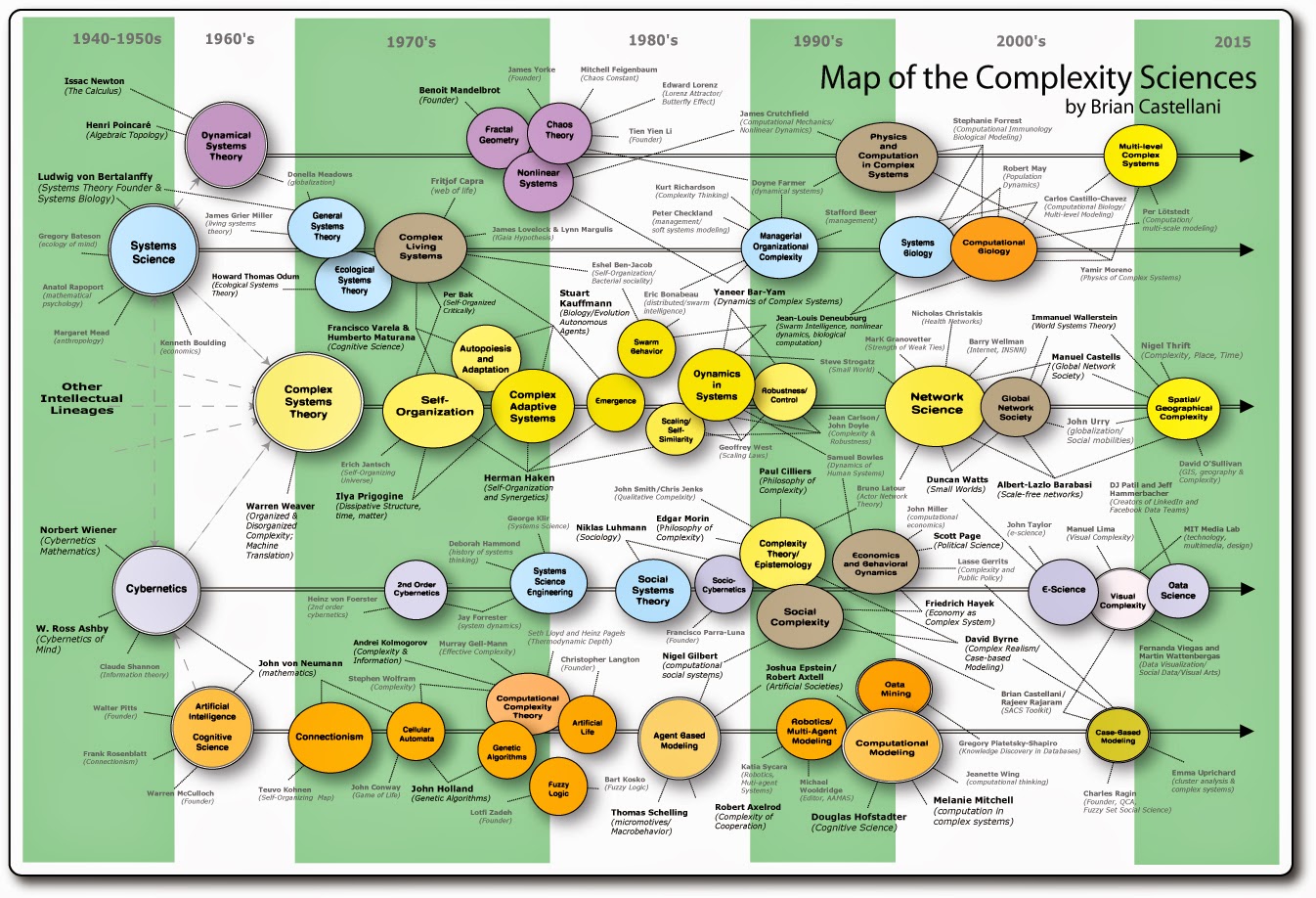 Oh, by the way, if Quetelet's terminology evolved (eventually) into the complexity sciences, what happened to Comte?  He went on to invent the other BIG social physics (science) devoted to uncovering the underlying and complex patterns of socio-bio-physical organization that govern the social behaviors of humans, individually and collectively!  We call it SOCIOLOGY!

Unfortunately, such a complex history (including its abject failures and the warnings of limits) is absent from Pentland's book.  But, the same hubris is there.  For example, if one goes back to the writings of Comte and Quetelet, one finds the same sort of over-reach that one finds in Pentland's book, as if these scholars had written the preface to his 2014 work.

Here, for example, is a blab about Quetelet and his new social physics on Wikipedia:


Quetelet was among the first who attempted to apply it [statistics] to social science, planning what he called a "social physics"….  His goal was to understand the statistical laws underlying such phenomena as crime rates, marriage rates or suicide rates. He wanted to explain the values of these variables by other social factors. These ideas were rather controversial among other scientists at the time who held that it contradicted the concept of freedom of choice….  His most influential book was Sur l'homme et le développement de ses facultés, ou Essai de physique sociale, published in 1835 (In English translation, it is titled Treatise on Man, but a literal translation would be "On Man and the Development of his Faculties, or Essays on Social Physics").

In 1872, E. B. Taylor wrote a review of Quetelet's work--Click Here.  It is a fascinating review, as it foreshadows many the exaggerated hopes and claims that would be made by the "emerging sciences of the human condition" that came into existence during the 19th and 20th centuries, from psychology and sociology to anthropology and history to cybernetics and systems science to -- today -- complexity science and (once again) social physics.

But, again, what all such claims lack is a sense of humility -- and one grounded, importantly enough, in the capacity for self-critique, which fields like sociocybernetics discovered forty years ago!  As Byrne and Callaghan point out, there are useful and not so useful ways to model social complexity, and an uncritical social physics can fall into the latter.

The need for self-critique and for a thoroughgoing explore of what does and does not work when modeling the complexity of big data, is why I very much enjoyed a recent review of Pentland's new book by Nichlos Carr -- writing for the MIT Technology Review.  Carr's piece is called The Limits of Big Data: A Review of Social Physics by Alex Pentland.

While acknowledging the potential of the-new-yet-not-so-new, in fact not-new-at-all science of social physics,  Carr is skeptical of its claims.  Big Data and Big Science are Big Ideas, that is for sure.  And, we do live in a data saturated present, as Uprichard claims.  But, as Uprichard also points out, Big Data does not necessarily lead to Big Ideas.  Worse, like so many before it, Big Data can lead to Big Bad policy.  In other words, as Byrne and Callaghan point out, while the new tools of data science and computational modeling and complexity science show great promise, there is no guarantee that more data or new fancy tools means better answers -- as, at best, we only study the … traces … of the complex systems we seek to model.

So, yes, we live in a data saturated present, with big data everywhere; and, yes, social scientists, working with interdisciplinary teams, need to find the best and most effective tools for making sense of all this data --which the sociologists, Savage and Burrows, for example, have discussed.  But, for me, it needs to be done in a rigorously critical manner, and with more than a grain of humility.

That is why I like this poster, which my wife, a librarian, is always fond to point out: 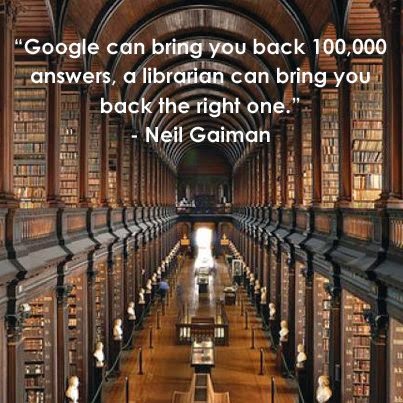