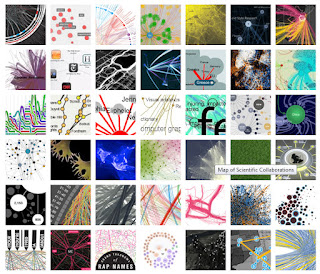 In a previous post--CLICK HERE--I mentioned a recent article in In the March 2012 (No 29) Special Issue of the Complex Systems Society on the aesthetic and pragmatic aspects of complexity art.

Another example of the intersection between complexity art and complexity science is a network of scholars, artists, designers, scientists, engineers and computer scientists working in a field known as INFORMATION DESIGN.

Wikipedia defines Information design as the skill and practice of preparing information so people can use it with efficiency and effectiveness. Where the data is complex or unstructured, a visual representation can express its meaning more clearly to the viewer.
---------------------

In terms of this definition, there is a smaller network of scholars in information design focused on the second sentence: exploring visual tools when dealing with complex data.

One example is Manuel Lima.  On his website it states that he is a "Fellow of the Royal Society of Arts, nominated by Creativity magazine as "one of the 50 most creative and influential minds of 2009", Manuel Lima is a Senior UX Design Lead at Microsoft Bing and founder of VisualComplexity.com - A visual exploration on mapping complex networks."

Lima refers to his work as Visual Complexity.

On the website for his book, it states the following: "Several researchers, scientists and designers across the globe are trying to make sense of a variety of complex networks using different technological tools at their disposal. They employ a mix of colors, symbols, graphics, algorithms and interactivity to advance cognition and deepen knowledge in each subject of analysis. By doing this they are in many ways creating the syntax of a new language. This book can be seen as the first dictionary of this new lexicon. The book will showcase and thoroughly analyze the variety of contemporary visual depictions of complex networks. It will cover its historical predecessors and grounds for recent popularity, and explore the ramifications of a new age of infinite interconnectedness. It will also include a set of recommendations and future predictions on the progress of Network Visualization."

Even more exciting than the book, which is very good, is Lima's website, which provides hundreds of examples of visual complexity that have been culled from a variety of internet and world wide web sources.  These images, which cross the entire field of complexity science, are incredible.

Also available is an incredible set of links to a variety of blogs, software, projects, etc.

If one did not think that complexity art was a real burgeoning network of scholars involved in a myriad of projects all around the world being influenced by and influencing not only complexity science but culture, business, economy, science and so forth, this website and, more important, the global art-information-science-business-datamining-cyberinfrastructure-cultural network society it connects to should leave you without a doubt.