Ranking: The Unwritten Rules of the Social Game We All Play

For those outside the complexity sciences and such related fields as computational neuroscience and systems biology, Péter Érdi’s (Henry R. Luce Professor, Center for Complex Systems Studies, Kalamazoo College) reputation is both impressive and world-renowned.

And it is this brilliance and intelligence that he puts to work in his new book, RANKING: The Unwritten Rules of the Social Game We All Play. (See also the blog he wrote while working on the book.) 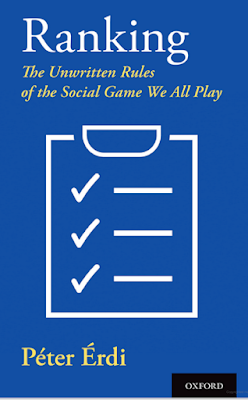 For me, as a colleague and also fan, this new book by Professor Érdi is superb, and not just because of the content, but because of the style in which it is written. For example, I really enjoyed how he mixed stories of growing up in Budapest and other personal experiences in order to illustrate key points. In fact, I enjoyed it so much that I almost read the entire book in one sitting! It flows very well; the writing is very good; and while the points being made are rigorously scientific – as in his discussions of ranking and cognitive bias, for example – they were easy to follow for a general readership, similar to some of the best popular science books.
Which leads to my main point: similar to Malcolm Gladwell’s work, this is provocative inquiry into the sociology of knowledge, particularly in terms of how our current virtual world of information is overrun with rankings: from university placements and stock market ratings to sports standings and social media ‘likes’ and ‘friending’ to political rankings and even scientific journal statuses! And, what is likewise worrying is the profound extent to which all of it guides and directs our daily decision making, from the colleges we attend and the doctors we visit to the politicians we elect and the ways we invest in our retirement. Ranking, ranking, and more rankings.... it is the statistical stuff of contemporary life!
To provide a bit more detail, here is a quick overview of the book from Oxford University Press, the publisher:

Human beings are competitive. We want to know who is the strongest, who is the richest, and who is the cleverest of all. Some situations, like ranking people based on height, can be ranked in objective ways. However, many "Top Ten" lists are based on subjective categorization and give only the illusion of objectivity.

In fact, we don't always want to be seen objectively since we don't mind having a better image or rank than deserved. Ranking: The Unwritten Rules of the Social Game We All Play applies scientific theories to everyday experience by raising and answering questions like: Are college ranking lists objective? How do we rank and rate countries based on their fragility, level of corruption, or even happiness? How do we find the most relevant web pages? How are employees ranked?

This book is for people who have a neighbour with a fancier car; employees, who are being ranked by their supervisors; managers, who are involved in ranking but may have qualms about the process; businesspeople interested in creating better visibility for their companies; scientists, writers, artists, and other competitors who would like to see themselves at the top of a success list; or college students who are just preparing to enter a new phase of social competition. Readers will engage in an intellectual adventure to better understand the difficulties of navigating between objectivity and subjectivity and to better identify and modify their place in real and virtual communities by combining human and computational intelligence.

All of which, when put together, is why I entirely agree with Scott Page's forward to the book. For Page and for me, with this provocative and accessible new study Professor Érdi has revealed to us a world that we (or at least I) did not realise was there, nor the powerful and somewhat distressing influence it has on the ‘lives’ we otherwise see as (somewhat falsely) under our own control.