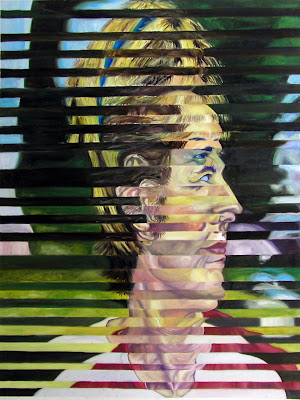 The above picture is another example of what I call complexity art. The technique is called assemblage (or, alternatively, assembled cubism). For more info, see my post from 25 April 2009.

The goal of assemblage is not to redefine the role of space or time in a picture. Instead, the goal is to pictorally represent complex systems--be these systems a single individual, two people in relationship, groups, humans and nature, humans and machines, etc.

Given this goal, the completed picture, while highly representational, is primarily symbolic. It is an iconic representations of a complex system--by icon I mean here a visual (semiotic) sign that stands in place of or acts as a simulacra of something else.

The above picture is an inconic representation of a mother and daughter. One can see the structural similarities between mother and daughter in terms of their eyes, neck muscles, etc. And yet, one loses a clear sense of who's part is which. Instead, the parts blend together to create a face that is neither the mother's or daughter's. This face is an emergent system entirely dependent upon the nuanced parts of which it is made. The result is a multi-singularity: multiplicity and difference within union and integration.
Posted by Factory Wiz at 14:37